On June 2, the Corinthian Yacht Club hosted the 11th annual Women’s Sailing Conference with a day-long series of classes and workshops, giving the novice-to-expert women sailors a terrific opportunity to network with other women while learning new skills or brushing up on old ones. Over 100 women participated with instructors as far away as Seattle.

The conference generally has half the program on-the water. However, due to the heavy seas and weather, only two classes proceeded in the harbor – Women Do Motorboats (Diana Wiedenbacker leader) and Crew Overboard (Pat Marshall leader). Many thanks to Garet Wohl who was the victim for both morning and afternoon sessions.

The other on-the-water workshops brought out the creativity of the leaders. Karen Lubeck (Take the Helm leader), took advantage of the Optimist pram tillers, securing them to the backs of chairs and then tipping over chairs to fasten line for a make-shift main sheet.

Through multiple demonstrations of different wind directions, the women walked through taking the helm. Carol Arnold (Spinnaker leader) converted a supporting pole under the porch into a mast and using Legos® and chairs and lines, created a virtual boat. A 4-foot spinnaker, all corners labeled appropriately, was hoisted up and fastened to the mini pole. No one’s spirits were dampened and no one went home. NWSA is grateful to all volunteers, new and returning. The conference is not possible without the support of many people – volunteers, sponsors and a supporting host facility.

Corinthian Commodore John Velluto welcomed the women in the morning and shared in the evening program with his wife, Flossie. The key note speaker was Teresa Carey, a U.S. Coast Guard licensed captain, writer and educator from Traverse City, Michigan. Teresa highlighted the creativity and the resourcefulness of women that ,come in handy when sailing, especially alone or away from the home port. You can learn more about Teresa at www.teresacarey.com.

The Leadership in Women’s Sailing Award, a joint award of the National Women’s Sailing Association and BoatU.S., was presented to Elaine Dickinson, former editor of BoatUS Magazine. Cited were Elaine’s various contributions to the boating and sailing community while at BoatUS, and notably her work to establish the BoatUS Women in Boating website. 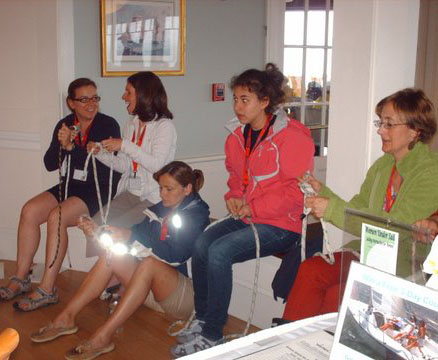 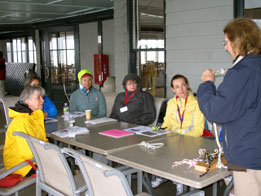 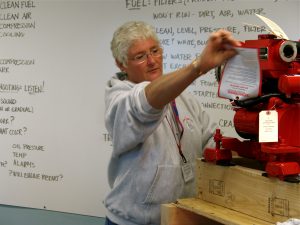 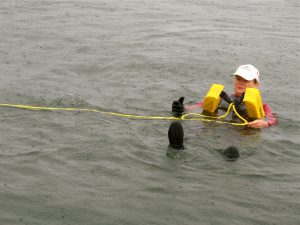 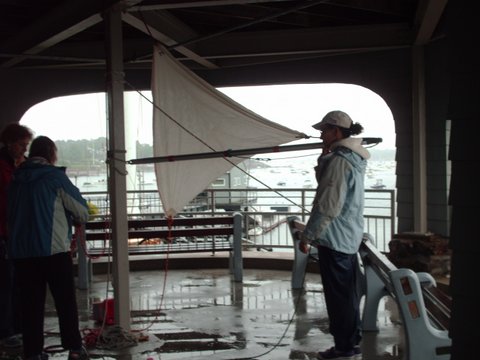 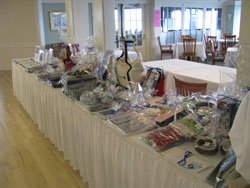 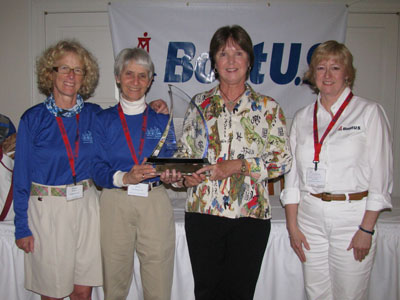 All photos courtesy of Kait Mulhfelder 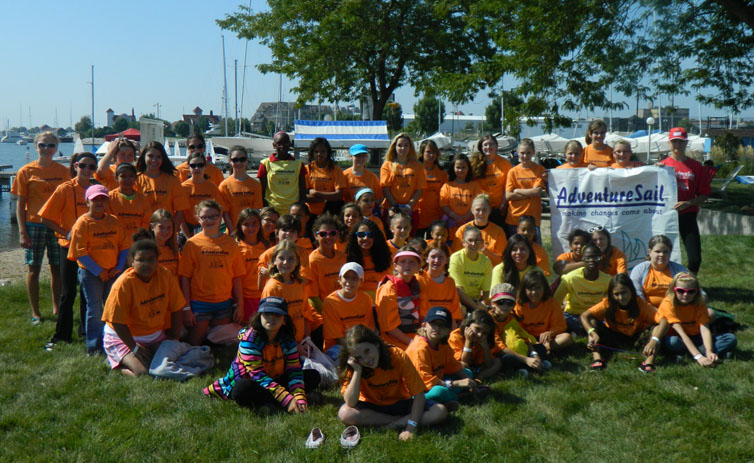 AdventureSail 2012 went off with a bang! Racine Yacht Club had 56 girls participate! More photos and a story to follow… 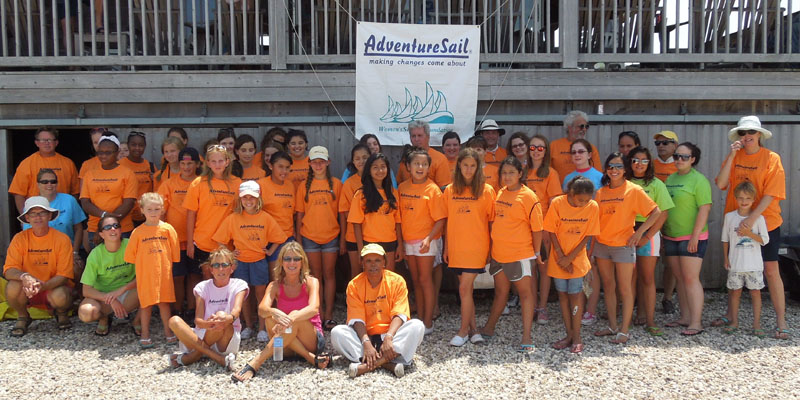 Breakwater Yacht Club (BYC) in Sag Harbor, NY, hosted its 13th annual Adventuresail® Regatta for Girls Saturday July 7th. Under sunny skies and perfect wind conditions, over 27 local area girls ranging in age from 9-16 participated as crew on the BYC racing fleet boats for a race around the buoys, while learning the basics of sailboat racing.  A few of the girls even helmed the boat while others trimmed sails and assisted with hoisting the spinnakers!  After the race, everyone enjoyed lunch and received gift bags and trophies. Participating groups were I-Tri of East Hampton, Montauk and Springs School District and Big Brothers and Sisters of Long Island.

Attending the event was Val Cook, who assisted in coordinating the very first event thirteen years ago.  Val, former president and current member of the Board of Directors of the Women’s Sailing Foundation (WSF) and Donna Lipper, member of the National Women’s Sailing Association, also a program of WSF.  Donna has been representing WSF since 1999 and enjoying every year.  Val extended  thanks to Charlene, Cam and Mary Ann Eddy and the Breakwater Yacht Club for continuing to provide a memorable day for the girls. 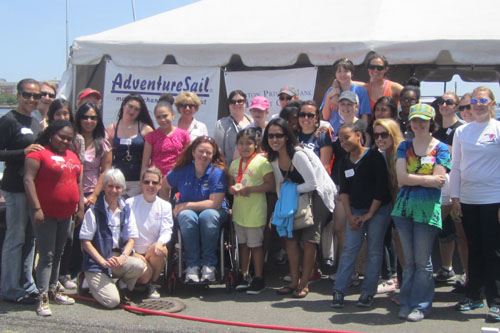 The 16th AdventureSail® event, a program of the Women’s Sailing Foundation, was held Saturday, June 9th at the Courageous Sailing Center in Charlestown. Eighteen pairs of girls from the Big Sister Association of Greater Boston were treated to a morning of sailing under sunny skies with gentle winds. Experienced women sailors volunteered to skipper the Rhodes 19’s, mentoring the girls and teaching them sailing basics.

Following lunch on the grill, co-chair Susan Epstein led a session of hands-on knot-tying. Marblehead’s Maureen McKinnon, Director of Development and Community Outreach at Courageous, shared her gold medal from the 2008 Paralympics in Beijing, China with the girls. Every girl had a chance to hold the medal, and more than a few couldn’t resist trying it on! Maureen explained that the design of Olympic/Paralympic medals reflects the host country’s culture. For the 2008 games, China incorporated various shades of jade, each shade reflecting the relative prestige of bronze, silver, and gold achievement. On Paralympic medals, inscriptions on the back are also in Braille, since some of the competitors are blind athletes.

Marblehead author Julie Hahnke, was the guest speaker. Thanks to the generous gift from a Marblehead sailing couple, Julie gave each of the girls an autographed copy of her book, The Grey Ghost. Julie also previewed her upcoming book, War Correspondent, a novel about the War of 1812, as told by an eleven-year-old girl (disguised as a boy) serving aboard USS Constitution. Julie and Maureen encouraged the girls to follow their dreams and to believe in themselves. Every facet of the day reinforced lessons of self-esteem, the pursuit of dreams, and never giving up. It was an inspirational message for all in attendance!

The staff at Courageous Sailing Center prepared the boats, gave the safety talk after the girls and big sisters were fitted out with pfds, were on hand to help when the boats returned and fired up the grill. Courageous is a wonderful partner in this event. Thanks to Boston Private Bank & Trust Company for its continued financial support so the girls would have the orange sherbert T-shirts and enjoy the barbecue. 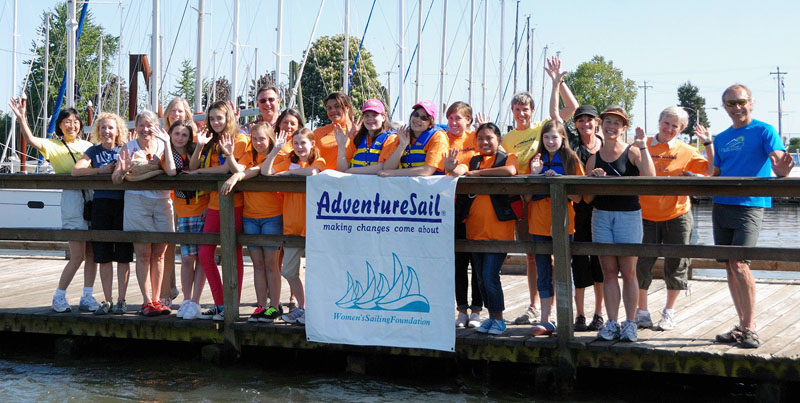 The Oregon Women Sailing Association (OWSA) brought AdventureSail® to Oregon again, only this time we did it twice – on May 12th & July 21st!  As in 2011, OWSA partnered with Girls Inc. of NW Oregon, a non-profit that helps young at-risk girls, to bring this exciting adventure to Portland. AdventureSail®, program of the Women’s Sailing Foundation, is a mentoring program for at-risk girls between the ages of 9 and 14. The program introduces basic sailing skills and boating safety, and incorporates life skills; such as leadership, responsibility, teamwork and environmental stewardship.
OWSA AdventureSail® is divided into three activities: Classroom, On-the-water and wrapping up with a Celebration Picnic.  On the day of each event, we were greeted with beautiful sunny skies and a steady breeze which continued throughout the day.

July 21, 2012 – The girls gathered with their OWSA Mentors @ the RCYC club house for an introduction to basic sailing, knot tying, safety & environmental stewardship. Following the classroom instruction, the young sailors headed out with their OWSA Mentors to meet their OWSA Skippers & Crew for an afternoon sail on the Columbia River.   The girls had the opportunity to experience and practice their new skills; such as, hoisting the main sail, bringing in a line and sharing time at the helm.  At the end of the day, all returned to shore for a Celebration  Picnic with family and friends, enjoying stories of adventure and success together.

This year we had 18 girls participate, and we were able to send three young sailors to ISC Junior Sailing Camp in August with scholarships provided by the Women’s Sailing Foundation.
We are grateful to all of the outstanding OWSA Mentors, Girls Inc. Chaperones, OWSA Skippers & Crew, and our fantastic boat owners, who made these two events a huge success.
Photo credits to Dena Kent, May 12th and Doreen Wynja, July 21st.

On July 10, 2012, at 4:00 p.m. 15 women arrived at the Courageous Sailing Center (CSC) to see what racing is all about.  The weather was almost perfect – sunny with gentle breezes.  Some women had little sailing experience.  A couple were seasoned racers.  Rosemary from CSC greeted us. We outfitted ourselves with PFDs and were assigned to a J-22 with an experienced CSC female staff member who would be skippering the boat.  We spent the first half hour just acclimating ourselves to the J-22. It’s quite a different story if you are used to a 35 or 45-foot cruising boat.  Just trying to avoid bumping your head or another crew member was a challenge.

We were given the overview of the race course, and we had lots of questions, such as ‘what does “pin end of the line mean?”, “What’s the lay line?”.  No time for full explanations.  We just had to learn on the fly.  The courses were short, so there was lots of action.  By the 3rd race, we were in sync with the boat and one another.

The racing was close.  We laughed as we rounded the marks, checking in our competition, but smiling all the way.  We hung out to hold the sails. We crouched down to have little wind resistance.  It’s all those small things that grab a few inches on the boat ahead.  We had a chance to take the helm on the way in or before the start of the races.  Again, for some the tiller was a new experience.

On shore, the CSC staff had the grill going with a buffet of burgers, chicken, kebobs.  The sun was still up and the breezes continued.  We all gathered around the tables and waited for the race committee personnel to bring out the board.  Each race had a different winner and in the end there was a tie for first!  No matter what the scoreboard said, we were all winners.  We had done something new.   Our self-confidence just went up another notch.  We had at least a basic knowledge of what happens on the race course. We supported one another in friendly competition and best of all, we had fun.  Photos do not lie. We’re ready to sign on again.

Race for a cause

The Ms. Race is an annual charity sailing regatta hosted by the Atlantic Highlands Yacht Club (NJ) each August, to benefit 180 Turning Lives Around. It is a race sponsored by and for women, with the support of the AHYC race committee. The Ms. Race was inaugurated in 2005 by a group of female sailors who regularly participate and crew in the yacht club’s Wednesday night race series. For more information, go to http://ahyc.net/msrace.htm

12 women came together at the Mack Boring Training Facility in Middleboro, MA, Saturday and Sunday, March 10 and 11th , 2012

They were an eager group of women who had some very serious offshore sailing plans or were in middle of retrofitting their own boat. Others were frequent crew members on boats with engine and they wanted to learn more about the diesel engine.

As in most of the workshops, women shared their experience and worked together on their assigned engines when we got away from the classroom and into the shop. Lots of high fives and wide grins and applauses when those engines were started Sunday afternoon. Larry Berlin, the instructor, was ready with the answers, and when he could not give one, he had the direction to follow to arrive at the answer. We shared time and supper at a local restaurant Saturday night.