At one point I looked up to see a towering wave looming much higher than the deck and as it curled towards me I realized it was going to break over the foredeck. I grabbed a shroud with both hands and waited for the wall of water to hit. I was sent spinning across the deck into the netting stretched over the lifelines. I scrambled to the high side. I could hear Sue screaming my name over the sound of the sizzling sea. She stopped calling my name when she saw my head reappear.

With the new sail rigged, I crawled back to the relative safety of the cockpit. Thoroughly soaked I collapsed for a brief respite before raising the jib. 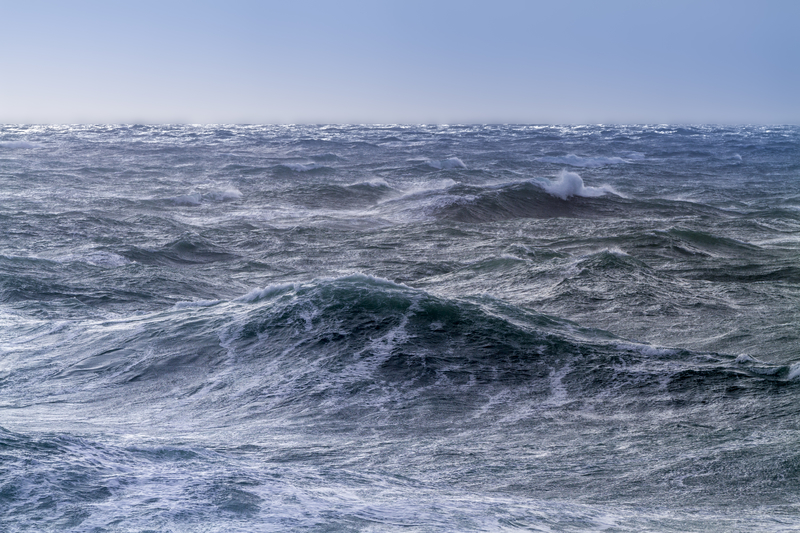 With Sue still on the helm, I dropped into the cabin to try to do some navigation to figure out where we were. After a few minutes, I looked up toward the stern and saw the coast. No! There was a beach and it was very close. I yelled, “Tack the boat NOW!” She did. We had the engine on, a triple reefed main and storm jib. The beach was getting closer with the breakers looking shallower. I scrambled from below with the thought we were being blown aground. When Sue tacked, turniing the boat away from shore, she hadn’t tacked the sails. Even with the engine on, we were being blown back onshore. With quickly corrected sails we slowly, ever so slowly, clawed away from the beach into deeper water! I did see antennas on land so I knew we were north of Stinson Beach and still south of Point Reyes.

We now knew where we were, thanks to our close call. We were making slow progress against the waves about one mile offshore. We were not out of danger but definitely heading South to safer waters. As darkness fell the wind continued to howl 50 knots and more. Just as I began thinking that we only had to hang on for a few more hours, so we could do this, Sue’s yell came out of the hatch. She had gone below to listen to the radio for weather information.

“There are people out here dying”, she screamed, making me shiver with dread. That’s a thought we both harbored during daylight but had not discussed. Listening to Channel 16 Sue heard three guys on a sailboat calling Mayday only a mile away from us. They were not in the race but were out for a lazy day sail in the ocean when the unforeseen storm had hit. Their boat had been dismasted as they approached an anchored freighter near Stinson Beach expecting someone onboard to help them. Now their boat was damaged and they feared it was sinking. The Coast Guard told them to don lifejackets, tie themselves together and go overboard to try to reach the beach less than a mile away. The Coasties couldn’t get to them for an hour or more as they couldn’t fly a helicopter in that wind strength. They could only come in a vessel. Sue and I both understood that crew in those seas, even with a beach less than a mile away, could mean death from hypothermia, if not drowning.

In the conditions we were in, trying to get to them was not an option. We felt helpless hearing their cries but we were in no position to help them. We continued slogging our way into the seas grateful we were still in a sound boat and so far surviving. Then our luck changed once again for the worse.

One of our leeward shrouds backed off and came loose from the turnbuckle and began swinging wildly around beating the cabin top and instruments. I knew I could reattach it, but Sue talked me out of it saying she was too scared to have me go forward again in the dark to try to wrestle it back in place especially since I would be standing in water holding on to the leeside. The upside was that I could stay safe. The downside was if the boat tacked and changed directions so the wind was on that side of the boat, the mast could collapse. So by not reattaching it, I was playing Russian roulette hoping I could keep the boat on the same course in seas that had not diminished. As I conceded I would leave it be, Sue stepped out of the hatchway to read the knot log. Before I could stop her she had swiped her hand across the face of the knotmeter to wipe away water and mist so she could read it. The glass had been shattered by the swinging stay. She cried out when a shard penetrated her hand. As Sue scrambled back into the cabin to find the first aid kit, I could hear her wailing about not getting the bleeding stopped. I was locked into steering and had to let her do what she could to apply pressure to get it stopped. After ten minutes it wasn’t stopped. I considered the possibility of having to make our own Mayday call. I could see that she was bleeding all over the interior of the boat. Finally she used ice to get it stopped then bandaged. By then we were on the edge of the infamous San Francisco Bar. Decision time again.

The San Francisco Bar is an area of relative shallow water extending on either side of the channel leading into San Francisco Bay caused by the deposit of silt from currents bringing it down from the central California Delta. In storm conditions, this relative shallowness causes the waves to build up higher than other places and can easily cause serious problems for small vessels transiting in a storm. Crossing n storm conditions raised our chances for damage but I was like a horse going to the barn. I wanted inside the Golden Gate and we only had a couple of miles to go, so I chanced it.

At first the change in the tumultuous seas bounced the boat around more than before, but my steering fell into a better rhythm and we were making it. We couldn’t change course putting wind on the side of the loosened stay. Suddenly a sneaker wave, about twice the size of the others, slammed into the side of the boat spinning us a complete 360 on top of the waves, ending heading in the same direction. Unbelievably the mast held.

Luck had held and we were going to make it home. By the time we got inside the Bay and back to the Ballena Bay Marina, the wind in the ocean was clocked at 70 knots at Point Bonita…hurricane force. Later we learned two of the three men we had heard on the radio had died before the Coast Guard arrived. A third who was better clothed for the cold weather had swum ashore then wandered to a house for help. Two other boats in our race were lost with all four crew dead. Two bodies and one boat were never found. Most boats did not brave the San Francisco Bar and didn’t try going against the storm, They ran downwind overnight then sailed into the Bay the next day when the wind abated. One boat tried to follow us across the Bar. Seeing us spinout they turned back to sea for the night. They didn’t think their boat could withstand the punishment.

For Sue and I, we were grateful to be among the living. For me, I learned some lessons that day, foremost being not go to sea unless you are totally prepared. And, we were really hungry when we got to the dock at midnight AND no more bananas on the boat.

Linda Newland serves as immediate past president of the National Women’s Sailing Association, a program of the Women’s Sailing Foundation.She is a member of America’s Boating Club—Point Wilson Sail & Power Squadron/16 lives in Port Hadlock, Washington, and serves as assistant squadron educational officer. An accomplished blue-water sailor, Linda teaches sailing and She also serves as vice president for administration for the Recreational Boating Association of Washington, which represents boaters in statewide boating legislation and regulatory issues.